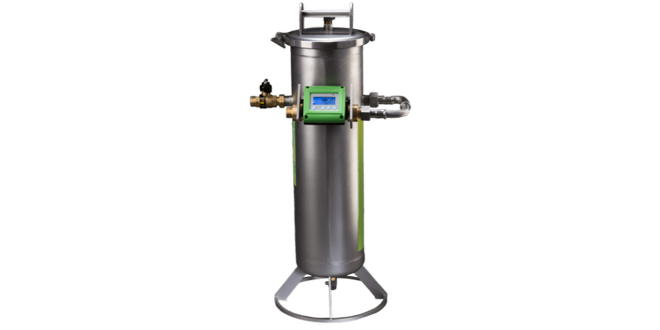 Posted by: jsharpe on June 17, 2020 in Heating, Technical Articles Leave a comment

How to clean a heating system, and how to prevent corrosion and sludge (magnetite) from forming in radiators are common challenges for heating and plumbing engineers.

In Germany, the VDI 2035 directive sets out the technical standards that the water in heating systems needs to adhere to. Magnetic, a German company, is bringing demineralisation technology and the VDI 2035 to the UK.

Nathan Gambling known as BetaTeach, hosted a live BetaTALK podcast with heating engineer Si Poskett, Joe Sharpe – Head of Content for Installer, and Michael Grimm – Director of Business Development at Magnetic, to discuss how UK engineers can adopt this way of thinking.

If the heating system is properly filled, no deposits can form and the corrosion is reduced to a minimum. Should damage nevertheless occur, there are various reasons. The causes of heating damage can be: Too much oxygen in the water, sludge has formed, and/or the ph is in the acidic range.

To ensure a system is “properly filled”, engineers carry out a six step process:

Step 1: Analyse the water in the system

The guide values for the heating water VDI 2035 standard are:

Fill the system with cleaner and leave it in there for at least one week. Skip this step if corrosion products can be flushed out. Note: *Steps one and two are not necessary if the system is filled for the first time

Flush the system to remove any dirt and sludge.

Step 5: Regulate and top up

Heating systems should be replenished to maintain the amount of water, and only demineralized water should be used.

Values should be <100 μS/ cm and pH around 7. During the following weeks the self-alkalisation process will bring the pH up to the desired 8.2-8.5. The pH value and the conductivity of the heating water should be checked again after six months to observe the development of the alkalisation.

By taking the ions (both cations and anions) out of the water when filling heating systems, installers can help to prevent corrosion as this method reduces the conductivity of the water.

Corrosion is an electrochemical process that relies on the heating water to be conductive – an electrolyte. Heating systems, whether using a boiler or a heat pump, become inefficient if corrosion is allowed to continue.

pH is discussed in this interview and how heating systems will naturally alkalise, sometimes referred to as self-alkalisation. Heating systems prefer an alkaline water and the VDI standard sets this at 8.2 to 10. Aluminium in heating systems tends to prefer 8.2 to 8.5.

Conductivity is measured in microsiemens per centimetre. It is a measure of how well a solution conducts an electric current between two electrodes which are placed a cm apart. The current flows by ion transport. The more ions present in the water the higher the conductivity. If ions are removed there is higher resistance to current flow. Microsiemens is written using the symbol “S” for Siemens and the greek letter µ means “micro”. The VDI 2035 requires system water to be below 100µS/cm (microsiemens per centimetre).

Water is known as the universal solvent, which means it’s basically good at dissolving stuff such as salts. It is these salts that form the cations and ions that resin from Magnetic removes. But as well as solids, water also dissolves air. It’s the dissolved oxygen which can be harmful to metals in the heating system. When we heat water, even by just a few degrees, the air comes out of the solution and micro-bubbles can also cause more damage through erosion. This is why it is recommended that the engineer will run a system as hot as possible when commissioning, to separate this air from the solution and vent it off. It is vented off with a deaeration device, sometimes known as a deaerator or air separator.

What is a deaeration device on a heating system?

These devices are common in Europe and the US but are just starting to become widely adopted in the UK. On a closed-loop sealed central-heating system they are considered quite vital in Germany.

It is hoped more engineers will adopt VDI 2035 methods and be able to explain to customers the importance for checking water hardness, pH and conductivity.

Nathan Gambling known as BetaTeach hosts a podcast which discusses energy, sustainability, low carbon technologies such as heatpumps and solarheat, as well as wider environmental issues. He interviews local plumbers and heating engineers as well as manufacturers, trainers, students and other stake holders.

Listen to all episodes here: https://www.buzzsprout.com/509671