A closer look at the Viessmann Ice Store system

Home » A closer look at the Viessmann Ice Store system 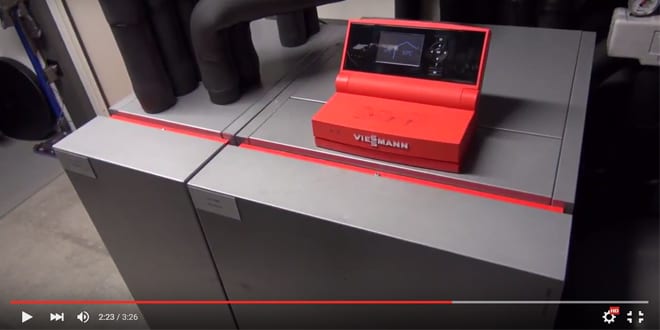 The Viessmann ice store system is an innovative renewable energy source to heat or cool a building and to heat domestic hot water.
This new technology has been adopted by HUF HAUS at the company’s first UK show house, so Installer headed down to find out more:

How the ice system works
The heat pump extracts the energy required for central heating and DHW heating from the water stored in the ice store as needed, throughout the year. As this energy is used, especially during the winter heating season, the temperature of the water in the ice store falls. If the temperature in the store falls to freezing point additional energy is obtained from the freezing of the water – hence the term ice store. During the transition from water to ice, the amount of crystallisation energy (latent heat) released is equivalent to that required for the inverse process of thawing, so in effect there is 100 % energy transfer and zero losses over time.
Freezing is an exothermic process, meaning that as liquid changes to solid, heat is released. The energy released upon freezing is a latent heat, and this means the potential energy in the ice store system is predominantly stored as latent heat. During the water’s phase transition from liquid to solid, a standard ice store for a detached house of approximately 10 m³ generates a heat gain equivalent to about 100 litres of fuel oil. A 10 m³ storage system is capable of 10 kW of heating output.
In summer the ice store can also be used to provide natural cooling for the building’s interior. This feature is an optional extra. Here, the water is allowed to fully turn to ice at the end of the heating season by the heat source management which interrupts the store regeneration. The ice created this way is then available as a source of natural cooling.
In cooling mode, heat is drawn from the heating system via the extraction heat exchanger and channeled into the ice store. This melts the ice and consequently cools the heating circuit within the home. Another advantage of the cooling option is that the natural cooling process doesn’t require the heat pump to be running, so running costs are greatly reduced.
Solar absorbers on the building’s roof, which are connected to the heat pump and ice store, collect the heat from the surrounding ambient air and from the sun’s radiation, which can be used either for the heat pump or to regenerate heat in the ice store. The ice store also draws the energy from the surrounding ground, if the ground has a higher temperature, to regenerate heat in the ice store out of the winter heating period. The water temperature in the ice store is thereby raised back to previous levels after the winter heating season, completing the cycle.
A heat source management system integrated in the heat pump control unit is programmed to use either the solar air absorber or the ice store system for heating, whichever has the higher temperature.
For more information, please visit: www.viessmann.co.uk 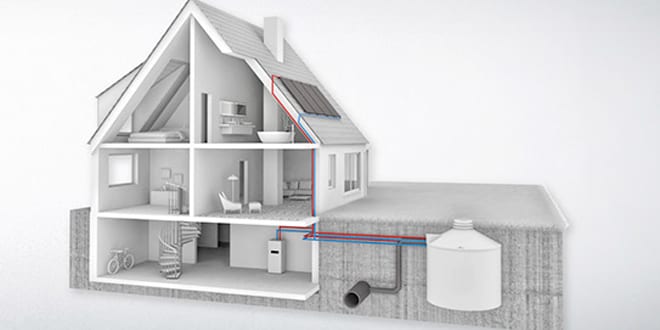 How to heat a house with Ice – Infographic 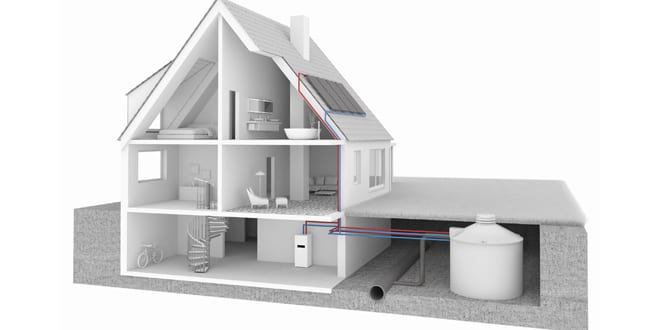