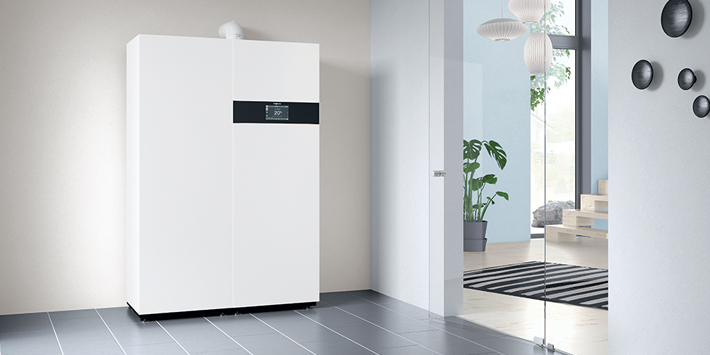 Viessmann has sold 10,000 units globally of its Vitovalor fuel cell technology, which simultaneously generates electricity and heat in buildings.

The milestone model was presented to Essenpreis Heizung & Sanitär GmbH in Östringen, a longstanding installation partner of Viessmann in Germany. It will be installed in a home in Karlsruhe.

The highly efficient Vitovalor micro-CHP system makes households less dependent on the electricity grid, protecting against increasing fuel prices. Energy costs can be reduced by up to 40% and CO2 emissions by up to 50% compared to a conventional boiler set-up. There is also a fuel cell-only module, Vitovalor PA2, which can be retrofitted to existing heating systems, including those using a gas condensing boiler.

The compact hydrogen fuel cell device is comprised of an integrated PEM fuel cell, a gas condensing boiler that covers peak heat demand peak on particularly cold days, a 220-litre DHW cylinder tower and the entire hydraulic system. Vitovalor has an electrical output of 750 W, can operate for up to 45 hours without interruption and generates up to 18 kWh per day when operated continuously. The average household can cover the majority of its daily energy needs autonomously and even become an exporter of surplus electricity.

The Vitovalor has been installed in many homes in the UK since it was introduced in 2014. It was the founding product technology of VitoEnergy, a heating system design and installation business founded by Adam Chapman and Patrick Wheeler, that has recently taken its 50th Vitovalor order.

Patrick Wheeler said: “The Vitovalor Hydrogen fuel cell fits into a valuable niche for home and business owners looking to reduce their carbon footprint and safeguard against rising energy costs. The technology works particularly well in properties that are not suitable for a heat pump, with high hot water requirements or with no cavity wall insulation for example, because it can run a flow temperature of up to 80°C unlike most heat pumps.

“The electricity generated is cheap and cleaner than traditional fossil fuel power, and able to produce more than double the annual generation of a 4 kW solar PV installation.

“Viessmann’s Vitovalor has a bright future in the UK, especially come the end of March when the Renewable Heat Incentive closes and we expect to see fuel cell technology as a very attractive alternative to heat pumps.”

A new, fourth generation Viessmann Vitovalor device will be launched in the spring. In addition to an extended lifespan, with operating hours increased by 5,000 to 85,000 hours, and extended six year service intervals, the new product line-up will be able to operate with natural gas containing a hydrogen admixture of up to 20 percent.