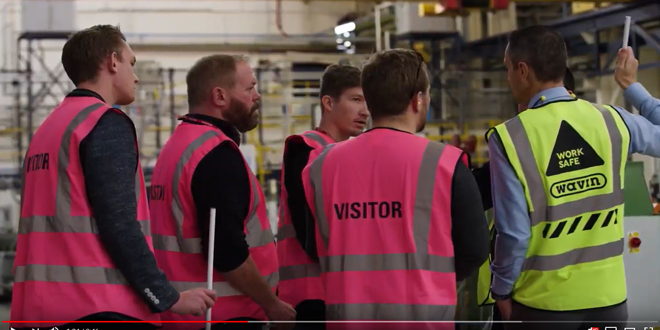 Posted by: jsharpe on February 13, 2019 in Installer TV Leave a comment

The two-day event spanned a range of activities from bowling and beers to an insightful tour of Hep2O’s factory where attendees got the chance to learn all about the product development, manufacturing and quality testing processes that the company’s products are put through before they are made available to the market.

Commenting on the tour, Plumberparts said:

“We had a really interesting tour around the Hep2O factory in Doncaster. We had a look at injection moulding. We had a look at the assembly of the fitting. We’ve saw the engineering bay and also the extrusion and the coiling of the pipe as well.

“During the tour, we also found out that all of the Hep2O that’s ever been made will go round the Earth three times. Stuff like that, cool little things that give you a real visual representation of what they actually make here.”

Not only that but following the tour, Hep2O carried out the industry’s first Facebook Live, hosted by James (Plumberparts) where the company answered questions submitted to the brand from the plumbing community with answers provided by technical experts including Steve Harris, Technical Service Engineer, and Paul Metcalfe, Product Manager at Hep2O.

“I thought the Facebook live was really good. It’s a new innovative way of doing something. I thought the questions were really spot on as well. There were some things in there that a lot of plumbers and the engineers wouldn’t have known. Definitely something that we could all take away from that,” commented Joe Sharpe, Online Editor at Installer Mag .

This is what attendees had say about the two day event…

“Something that I took away from today was the fact that Hep2O as a brand really wants to have a community and help their workers, I was really impressed by that,” said James Finlay

“I think it’s called a rumble and it’s got a misshaped end and a misshaped actual fitting so that when you push it in you can twist it and you can feel that it’s gone past the O ring and it’s not going to leak. Out of everything that I take away today I think that’s a fantastic innovation for the plastic fittings.

“It’s been fantastic to see all the innovations and how amazing the Hep2O factory is,” said Andy Cam.