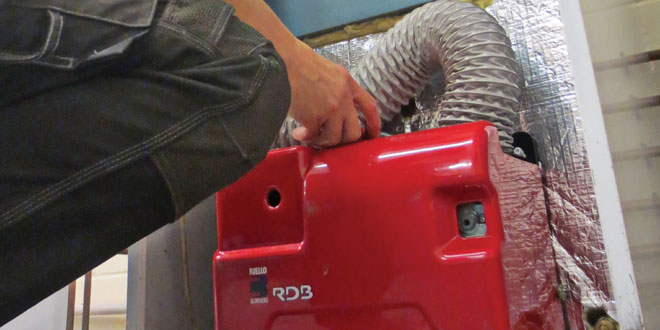 Posted by: Installer Online on October 21, 2013 in Installer Focus Leave a comment

Where next for oil?

Despite a seemingly common consensus that oil was no longer a valid option for heating UK homes, there has been an increase in sales in the first half of 2013. David Hall looks at the current state of the oil heating sector and what the future holds.

Many people in the heating sector have been less than complimentary about the future of oil. As the gas network has expanded and the costs of heating the home have escalated, oil has had its fair share of detractors. But many installers operating in the rural areas and off-grid parts of the country still earn a significant part of their income from installing and maintaining oil-fired boilers and appliances.

In excess of 1 million homes currently rely on oil as a means of providing heating and cooking. Even with a reduction in the number of homes each year relying on oil, which is undoubtedly taking place, the number will remain high – around 5% of the homes in the UK – for the foreseeable future.

There will always be parts of the country where mains gas will never be an option. And recently there’s been some good news for oil-fired heating reliant homeowners. The latest independent analysis of central heating and hot water costs has shown that the price gap between oil and gas has narrowed significantly compared to 12 months ago.

According to the Sutherland Tables, the cost of providing gas heating and hot water for an average three bedroom home rose by 7% since last year, whereas the price of oil heating only experienced a 2% increase.

The cost of oil heating now stands at around £1,294 per annum, which is 33% cheaper than off grid rival LPG and 11% cheaper than electric heating. Oil is also 5% cheaper than an air source heat pump system that is working with radiators. The cost of using gas for heating and hot water is just over £1,079 per annum.

Installers can help homeowners save money on their fuel bills by upgrading their controls, and switching from conventional to condensing boilers. The latest figures show that replacing an old boiler with a high efficiency condensing one can reduce fuel bills by almost 20%.

However, the average expectation is that of the 1 million oil-fired boilers in the UK, more than 50,000 will fail each year. So maybe, after several years of ‘hanging on’, a larger number of elderly oil-fired boilers have given up the ghost in 2013. We will only know for sure in 2014. But that is clearly good news for oil-fired boiler installers up and down the country.

“Oil is still an important component of our business. The larger towns in the area have natural gas but once you move out into the countryside, oil is the commonest form of heating.  Because the average age of oil boilers tends to be far older than the average age of a gas boiler, we have seen a lot of repair work over the past few years as the economic climate has understandably seen people reluctant to shell out on a replacement boiler. That seems to be changing a bit this year with more oil-fired boiler replacements than last year, but there’s far from a rush to do so.”

Most boiler sales are distress purchases to replace an existing boiler that has failed, and in the last two or three years, there has been a significant shift towards repair rather than replace. If it’s possible to keep the existing unit running, its owner will.

When replacement is the only option, installing a new oil boiler – rather than installing a different technology – will always be the least expensive option. However, if a new oil tank is required, the total cost of a new boiler and tank (including installation) will set the homeowner back at least £4,000.

Many in the oil heating sector – Grant among them – recognised many years ago that oil was likely to come in for some serious criticism as the drive for alternatives to fossil-fuelled appliances gathered pace, and this resulted in some early investment in what were seen as the most likely renewable options to be readily accepted. This has seen Grant develop a range of alternative technologies such as solar thermal, air source heat pumps, cylinders and condensing biomass pellet boilers – which are steadily increasing in popularity.

From Grant’s point of view, the sales of oil boilers over the past couple of years would suggest that the rumours of the death of the oil-fired boiler are somewhat premature. While we can’t take responsibility for all of the 19% increase in oil-fired boiler sales in the first six months of 2013, we are happy that we can take responsibility for a significant chunk of it.

Daikin calls on installers to join energy for change journey