Should young women be urged to fill construction jobs?

Home » Should young women be urged to fill construction jobs? 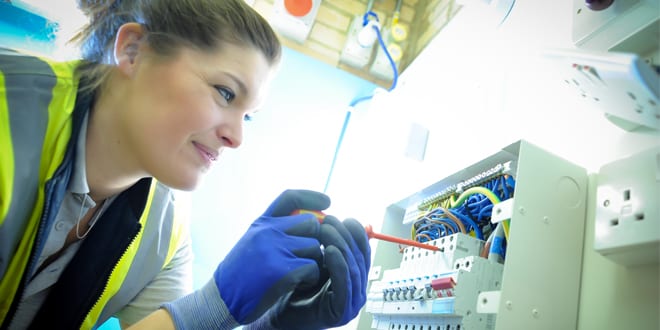 The national skills shortage in the construction industry has been well publicised. It’s rather surprising then that, according to Office for National Statistics (ONS), the number of construction apprentices in the country is in decline; this is despite a national need for more construction workers.
It is National Apprenticeship Week on 14th to 18th March. The total number of UK apprentices has risen by 57% in the past five years, but the number opting for construction has plummeted to 15,510 from 20,000 in 2006. And of these 15,510 construction apprentices, just 270 or 1.7% were female.
An East London college has bucked the trend massively; Barking & Dagenham College has had a staggering 404% increase in construction apprentices on the previous year and, what’s more 4% of them were female. The College has more than double the national average of female construction apprentices, but it’s still, they say, a tiny number (9).
Barking & Dagenham College, along with Kath Moore, Managing Director of Women into Construction are among a growing body of people who are urging more women to join the construction industry. Kath says: “We have a huge skills shortage in the construction industry and encouraging young women into construction would be an obvious way of addressing this.
“Construction should be sold to girls and young women as an area that they will be welcomed into; they need to know that they won’t have to fight their way in. In order to do that, the industry needs to specifically target young women and make it clear that their job applications are welcome.
“What’s more, it’s potentially well paid and there are great opportunities to progress; there needs to be a more education about what working in construction involves and how exciting and varied a career choice it can be.”
Kath trained as a carpenter at the age of 19, but she was considered ‘too old’ for an Apprenticeship as, at that time, Apprenticeships were only available for 16-18 year olds; now, however, 19-24 year olds are actively encouraged to take up Apprenticeships too.
One such young woman who has opted for the industry is Amy Harrington, 26 a female apprentice electrician from Essex who trains at Barking & Dagenham College for one day a week and has a job at CHP, a housing association. Less than one in every thousand electrical contractors in the UK is female. Keen to encourage other young women to follow in her footsteps, Amy explains why she enjoys her job so much,
“As an apprentice, being out on jobs with my CHP colleagues means I learn aspects of the job that I can apply to my college work and vice versa. Electrical work isn’t particularly hard physically, but it tests your logic skills you have to be mentally agile. I enjoy a challenge!”
Emma Clancy, CEO of NICEIC added, “It is great to see young women like Amy have such a positive attitude and determination to succeed.
“The construction and engineering sectors are growing and now offering more opportunities for skilled workers.
“There is a pressing need to fill skills gap in certain sectors – one of which is qualified electricians.
“We want to encourage women to consider becoming an electrician and raise awareness about the rewarding careers available.”
It is National Apprenticeship Week on 14th to 18th March. If you’re interested in becoming an apprentice or taking on an apprentice call the National Apprenticeship Service on 08000 150 600 or go to GOV.UK and search ‘Apprenticeships’ or ‘traineeships’.